McGregor and Mayweather make their grand entrances in Las Vegas

by Antonio Castelan and Amber Dixon 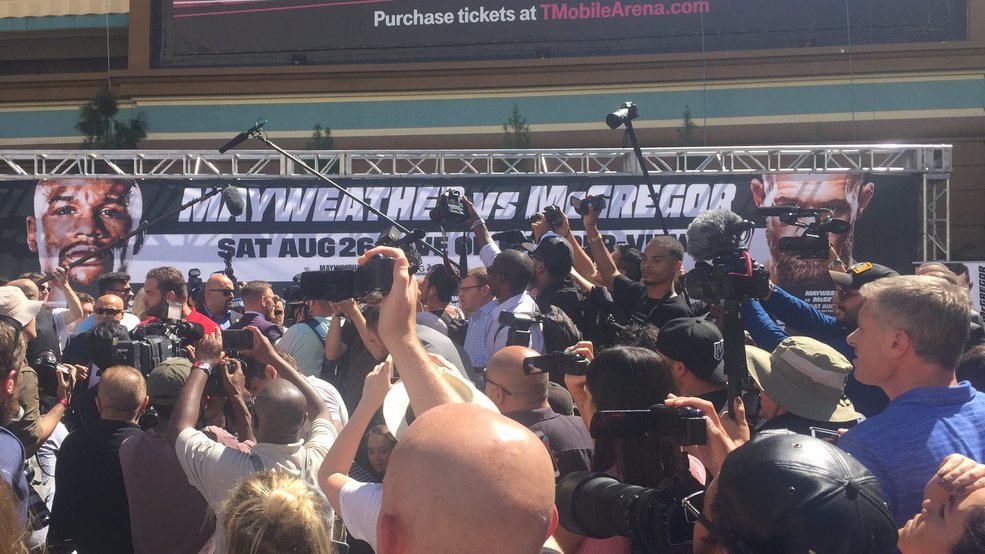 The stage is set for the Mayweather-McGregor grand entrance ahead of their Aug. 26 fight at T-Mobile Arena. (Antonio Castelan | KSNV)

Mayweather made his grand entrance in front of 900 screaming fight fans at T-Mobile Arena.

McGregor made sure not to be out done.

"The notorious Conor McGregor!" the announcer then yelled to the crowd.

The Irishman went straight for the crowd and his fans loved it.

"McGregor in a landslide!" said David Huddleston from Arkansas.

"A lot of hype -- a lot of back and forth. I hope he brings it home!" said John Wolfe from Washington D.C.

Mayweather says he plans on bringing it home for his 50th and final fight.

"We owe the fans an exciting fight and I think I'm happy it is the 50th," said Mayweather.

RELATED LINK | Whatever the result, Mayweather-McGregor bout will be winner for local economy

Boxing experts see the UFC star as a longshot. McGregor doesn't see it that way.

"I believe he will be unconscious inside one round, yeah!" said McGregor.

Mayweather fan David Alvarez took a week off of work to enjoy Fight Week and says a McGregor victory is only a dream.

"I don't expect a competitive fight this weekend. I think it will be a landslide for Mayweather," said Alvarez.

Mayweather agrees with the prediction -- and believes it will not go the distance.

"If you are going to bet, bet it won't go," said Mayweather.

McGregor is confident he and his countrymen from Ireland will reign supreme.

"Vegas is Ireland, we will rule Las Vegas!" said McGregor.