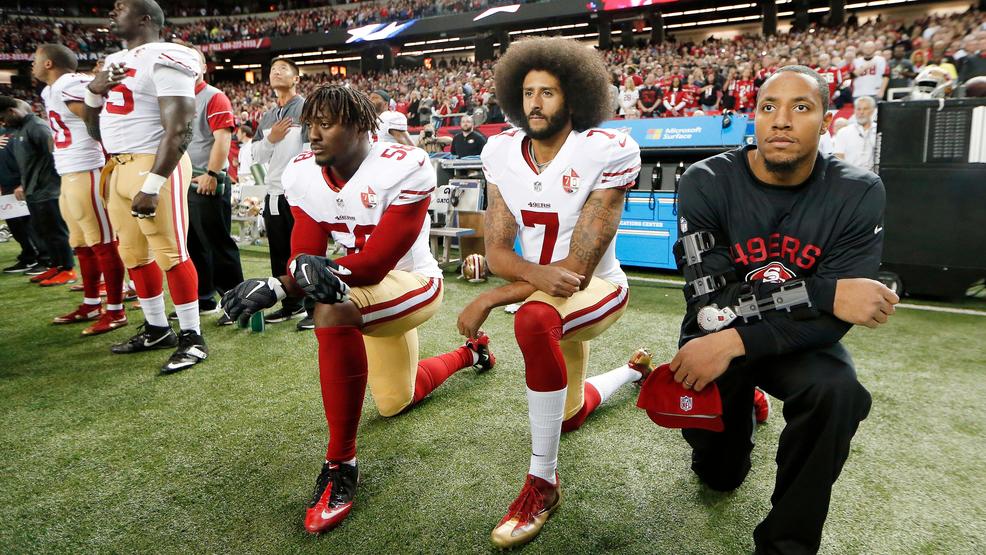 FILE - In this Dec. 18, 2016, file photo, San Francisco 49ers quarterback Colin Kaepernick (7) and outside linebacker Eli Harold (58) kneel during the playing of the national anthem before an NFL football game against the Atlanta Falcons in Atlanta. The blackballed quarterback was honored as Week 1 Community MVP by the players' union for his latest $100,000 donation and a back-to-school giveaway in New York City. (AP Photo/John Bazemore, File)

Colin Kaepernick has filed a grievance against the NFL owners accusing them of collusion.

Mike Freeman of Bleacher Report first broke the news of the former San Francisco 49ers' quarterback's actions during the first slate of NFL games on Sunday.

Freeman reports that Kaepernick is filing the grievance under the leagues' Collective Bargaining Agreement.

Kaepernick has been out of football since the 2016 season after he became a national figure credited with starting a movement to protest against discrimination.

"If the NFL (as well as all professional sports leagues) is to remain a meritocracy, then principled and peaceful political protest, which the owners themselves made great theater imitating weeks ago, should not be punished and athletes should not be denied employment based on partisan political provocation by the Executive Branch of our government," Geragos said in part of a statement obtained by NFL Network's Ian Rapoport.

In the 2016 preseason, Kaepernick sat during the national anthem as a protest of police discrimination against people of color. Kaepernick then began kneeling during the anthem as the season progressed.

Other players followed his example, either kneeling, sitting or raising a fist during the song.

These actions drew criticism from those who deemed the players' actions unpatriotic or disrespectful.

The movement has grown even larger in 2017 after President Donald Trump proposed firing any players who kneeled during the anthem.

A report even surfaced Tuesday that the NFL owners were reportedly considering requiring its players to stand during the national anthem.

Meanwhile, Kaepernick has not played a down of NFL football since opting out of the final year of his contract with San Francisco. ESPN reported that the 49ers would have cut Kaepernick if he did not decide to leave.

Many have criticized NFL owners for not signing Kaepernick in favor of less experienced or less talented quarterbacks, especially when set against a backdrop of poor play and injuries affecting a number of NFL quarterbacks.

According to ESPN's The Undefeated, 39 quarterbacks have been signed ahead of Kaepernick between the time he became an NFL free agent and October 4.

In six seasons, Kaepernick has thrown for 12,271 yards, 72 touchdowns and 30 interceptions with a completion percentage of 59.8 while rushing for 2,300 yards and 13 touchdowns. He has a career quarterback rating of 88.9 and has appeared in two NFC Championship games and Super Bowl XLVII.